That’s my boy in the video for Forever Yours, the Scentsy Scent of the Month for January 2014!

It is such a touching video.  So nicely done.  A little girl grows up, and at each stage in her life, loves her daddy.

My boy has a quick appearance as a dance date to the teen version of the growing girl.  And that teen version happens to be my cousin Jessica 🙂  The scene was shot in Boise’s north end.  It was bitterly cold that day, but these two were troopers.

I can’t help but share a few photos of these two when they were little.

I die.  That is my baby boy.  Can I have him back please?  And Jessica is toooo cute!

Okay, back to 2014….  I caught a pensive pose of Chandler as he was waiting for his scene.  No, really it was a “stop taking pictures, mom” pose.

Aren’t these two sisters sweet?  That’s Jessica putting on earrings, with her lil’ sis Adrianne watching.  Adri was the little girl in the video, who had to run back to give her dad a hug before school.  This video was a family affair 🙂

Take a peek at the short and sweet video: Scentsy Scent of the Month, January 2014 – Forever Young .  My cousin Sara produced it.  Isn’t she talented?  She has such a vision! 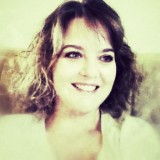 I'm passionate about creativity, productivity, and business. I'm a planner at heart, a small town girl, a wife and mom of two. I LOVE to make things with my own two hands.

This site uses Akismet to reduce spam. Learn how your comment data is processed.